From chart 2 below, the overall pay mix varies across different industries. For example, IT and Financials industry tend to have a more balanced pay mix and it is more prevalent to offer LTI to top management, whereas total compensation in other industries is mainly composed of fixed pay and bonus, with LTI accounting for less than 20%. 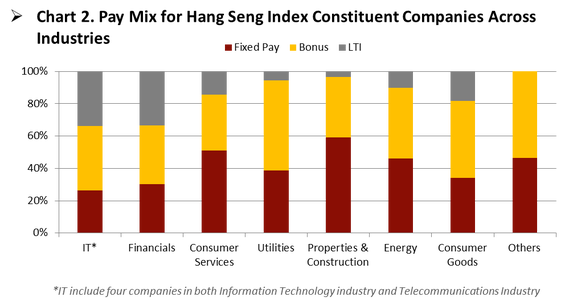 Comparing with fixed pay and annual bonus, a well structured LTI plan could enable better alignment of company and shareholders’ interests as well as employee retention. Based on our recent Year-end Reward & Performance Trends Study, we noticed more companies in both Hong Kong and Mainland China are beginning to introduce new LTI plans or review existing ones to drive long-term business success.

There are different types of LTI schemes with their own pros and cons.  Share options can promote alignment of top management and shareholders’ interest and encourage senior executives to put more focus on long-term growth.  However, share options are typically structured as a time-based plan and are not linked to future company performance (except share price). According to the Pretium Study, share option plan seems to be the most popular LTI scheme among listed companies in Hong Kong with 60% of the firms adopting it.  However, when taking a closer look, only 11 firms actually issued share options in 2012 and 13 firms have never issued any share options under their schemes or have not issued any share options for the last 5 years due to concern on share dilution and impact on accounting expense. 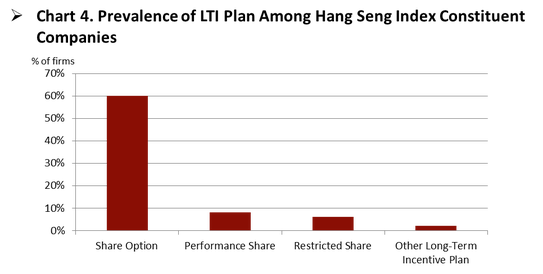 Globally, share options plans have lost its popularity and have been gradually replaced by other more performance-driven plans such as performance shares. Among the FTSE 100 companies, around 90% of the companies are using performance shares as LTI. In contrast, only a few listed companies in Hong Kong such as HSBC, AIA and Lenovo use performance shares or restricted shares as their LTI plans as well as pay and performance alignment vehicle. Performance share seems to be a more effective incentive vehicle as payout and vesting would be closely linked to achievement of key performance indicators (KPIs) resulting meaningful upside/downside opportunities.

Among major companies in Greater China, vesting of LTI is typically tied to employees’ continuous employment with the firm. In contrast, companies in the US, UK and Europe would typically incorporate performance conditions into LTI vesting to better strengthen alignment of executive compensation with company’s long-term performance.

Having the right pay mix and LTI vehicle is just part of the alignment equation, the missing link is to ensure total compensation levels actually reflect company performance and affordability. From the shareholders’ perspective, total compensation levels need to be balanced between competitiveness and cost effectiveness.  Appropriate pay and performance benchmarking could be conducted based on executives’ profile relative to similar positions in the market to help Remuneration Committee understand the current pay competitiveness and relative performance compared to peers. To foster pay and performance alignment, a top performing company might consider benchmarking its senior executives more aggressively along the market compensation range for better staff retention and maintain its leading market position in terms of both pay and performance. The final compensation positioning would normally be a function of business strategy, staff retention and/or affordability.

According to Pretium Study, the pay-for-performance culture among Hang Seng Index Constituent Companies is not as prevalent as international ones due to the nature of these firms, among which more than half are either state-owned enterprise in Mainland China or family businesses in Hong Kong. When taking a closer look, the situation is more serious for China based firms which, due to their state-owned nature, have significantly lower pay than their counterparts with similar scale and business in Hong Kong (Chart 5) . The study also shows the pay gap between the two different “markets” is more significant at the CEO level than at other top management positions.

Pay and performance alignment is becoming more tricky when similar benchmark is hard to find in the local market for some unique positions.  In order to tackle the lack of data issue and to provide a reasonable market benchmark, some companies apply compensation relativities to identify the difference in pay (in terms of index or differentials) between the anchor and subject positions. This kind of relativities among top management could also serve as a valuable verification reference during the executive benchmarking process to assess internal relativities. Assuming the CEO’s pay as 1, the chart below illustrates the median compensation relativities between CEO and other top executives across industries. 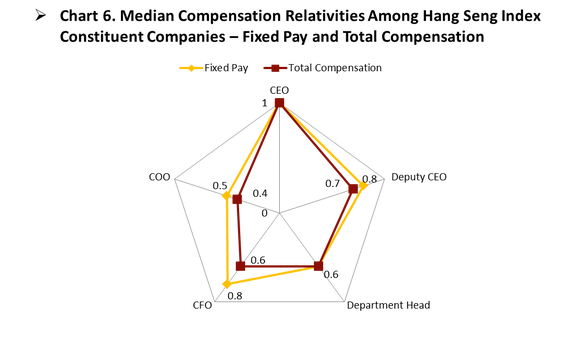 Though the overall relativities are quite consistent between fixed pay and total compensation in chart 6, variations could actually be fairly significant, and even among individual executive positions, depending on different industries, company scale, business development stages, etc.

Case Study – Alignment of Performance and Reward at Standard Chartered

In order to exemplify how pay and performance alignment could be achieved, the CEO compensation (including base salary, benefits, annual performance bonus and expected value of performance share award) of Standard Chartered is compared against the total shareholder return (“TSR”) and operating profit over 10 years. 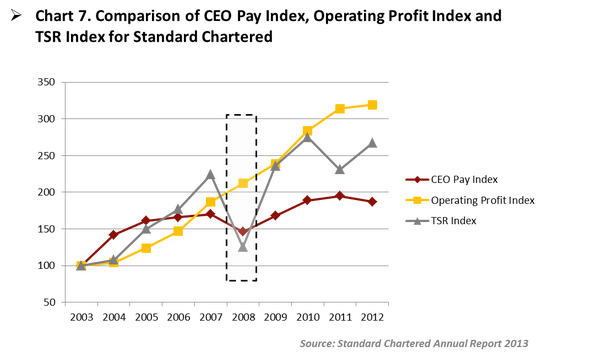 The graph above shows TSR dropped significantly due to the global financial crisis albeit operating profit was still in an upward trend.  The CEO pay index decreased slightly to reflect the slump in TSR which was one of the KPIs of annual performance award and the performance share awards for the CEO.

The case as illustrated on chart 7 is a classic example to illustrate how executive compensation could highly correlate with company performance and shareholders’ interest.  The pay and performance alignment review could assess the linkage of executive compensation on both absolute (compare pay levels to firm performance) and relative (compare pay levels and firm performance against a pre-selected industry comparator peer group) angles.  On an absolute basis, this assessment evaluates the efficacy and alignment of CEO’s pay packages on a long-term basis from a shareholder’s perspective.  On a relative basis, this assessment compares the pay levels and company performance among a group of companies that are reasonably similar in terms of industry profile, size and market capitalization.  This articulates a robust pay-for-performance assessment for the Boards and shareholders to determine the top management package.  Obviously, the appropriate KPIs to be deployed could vary among companies depending on the business nature, stage of business development, market environment, etc.